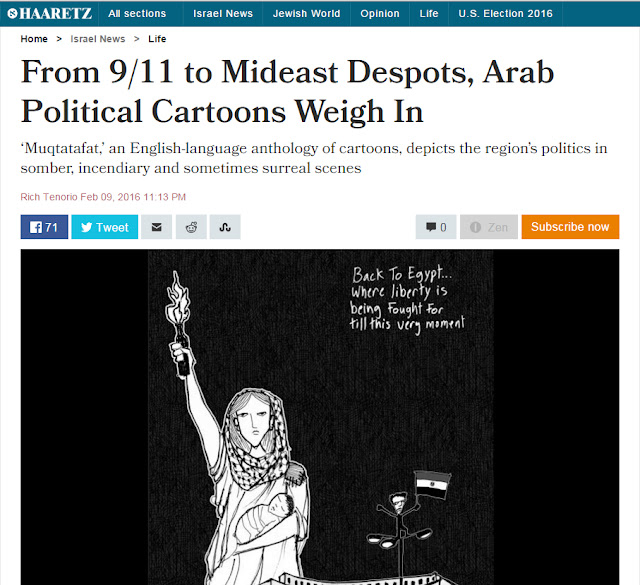 What do a scatological genie arising from a toilet, Hosni Mubarak, Occupy Wall Street, and husband-and-wife bloggers navigating the Arab Spring have in common?
They’re all found within “Muqtatafat: A Comics Anthology Featuring Artists from the Middle East Region,” billed as the first collection of independent comics from the Arab world printed in the United States.
“Two questions loomed large for me,” co-editor Anna Mudd told an audience in Cambridge, Massachusetts last week at the anthology’s launch. “What do comics do that other media do not? … And what does it mean to write, study, teach and understand comics in a regional context?”

“Muqtatafat,” which means “anthology” in Arabic, offers some answers. The collection, split into Arabic and English sections, features 14 contributors whose illustrated stories range from the satiric to the somber, the serious to the silly.
On the more outrageous end is the Lebanese author Wassim Maouad’s “The Genie of the Throne,” in which a talking piece of excrement splashes out of a toilet to greet a new master who ascends to political power in the fictional nation of Banabia. Maouad’s style recalls the playful visuals of Mad magazine and the influential American cartoonist Robert Crumb.

Other contributors focus their satire on modern politics and world leaders. In “Liberty Gone Wild,” by the Jordanian contributor Nidal El Khairy, U.S. President Barack Obama and former Egyptian President Hosni Mubarak plot to shut down Occupy Wall Street protests. One panel, set in Cairo, depicts the Statue of Liberty in a kaffiyeh with a baby in one hand and a Molotov cocktail in the other.

And in 2010, the founders of the Beirut-based experimental comics magazine “Samandal” were accused of denigrating Christianity for publishing images of a priest and imam being set on fire, and a Roman centurion having sex with a legionnaire and then massacring a village of Christians. In 2015, the publication was fined $20,000 U.S. dollars.

Merhej, who works as an editor for “Samandal,” declined to comment to Haaretz, citing Lebanese law that prohibits contact with any Israeli institution.

Proceeds from the first print run of “Muqtatafat” will go to help “Samandal,” said the anthology’s publisher Dan Mazur.
“I realized there was a connection” between Samandal’s troubles and attacks on political cartoons elsewhere, he said.

“It was eight, nine months after [the attack on French satirical magazine] Charlie Hebdo. There are so many strong reverberations for cartooning, politics, Middle East governments.”

Most of “Muqtatafat” likely won’t generate the controversy that “Samandal” did. But it does not shy away from tough topics. According to Mazur, the most challenging piece is the Arabic-language “When Worlds Collide,” by Jana Traboulsi of Lebanon, which depicts the attacks on the World Trade Center on September 11, 2001.

Concerned that it might be misinterpreted, Mazur asked Traboulsi to include an artist statement to explain that the cartoon is a condemnation of the attacks as well as a criticism of corruption and unchecked construction of skyscrapers in Beirut.

“You read the full explanation, the context, and you understand,” Mazur said. “It’s tricky, very tricky material.”
One topic the collection largely avoids is the Israeli-Palestinian conflict. The “Filsteezy” cartoons by the Palestinian duo of Mahdi Fleifel and Basel Nasr discuss Palestinian family origins and identity, but do not directly mention Israel.

Yet during the launch event, Mudd cited Israel as one of several Middle East countries with a burgeoning cartoon scene, along with Tunisia, Morocco and Iran, and singled out “Exit Wounds,” the 2007 graphic novel by Israeli cartoonist Rutu Modan.

“There are some amazing things going on in Israel,” she said.

The idea for “Muqtatafat” came from the Boston Comics Roundtable, a group founded by Mazur. In 2010, Mudd attended a meeting and discussed her interest in Middle Eastern cartoons, having noticed a flourishing independent scene in the region.

She began talking to Arab cartoonists, and met a few in person. Soon, the book project developed.
“American audiences had less exposure [to Arab cartoonists],” she said, explaining the need for an English-language translation. After plans to publish with Harvard University fell through, Mazur stepped in as publisher.

“I’d just like to see [the anthology become] one more part of a sympathetic communication between Western and Middle Eastern cultures,” Mazur said. “If independent cartoonists from different countries can understand each other, it’s not a start, but it’s one more point of sympathy between cultures that have a lot of conflict.”