The Greatest of All Time

The Greatest of All Time Comics Anthology:

Preview Pages
Labels: Anthology, Comics, Store, The Greatest of All Time
No comments:

Hot off the Presses!

The GREATEST OF ALL TIME COMICS ANTHOLOGY exists!
Buy it this weekend at the Holly Fair or the Bazaar Bizarre. Or order it right now! 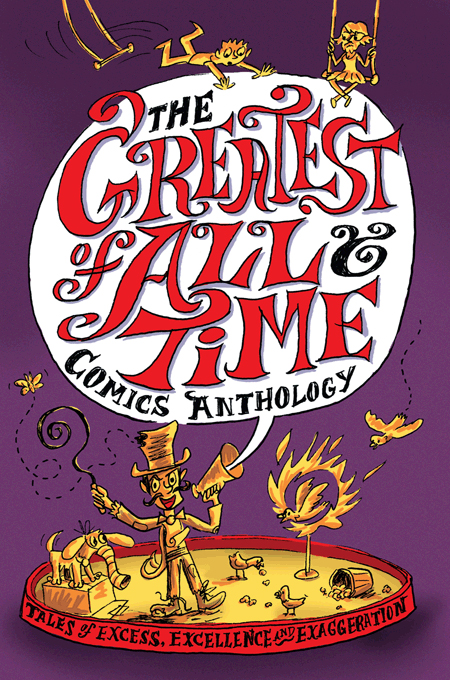 The fantasmagorical cover is by Dan Moynihan, and here is our slightly snarky press release:

THE GREATEST OF ALL TIME COMICS ANTHOLOGY

Ninth Art Press is justifiably proud to announce the publication of The Greatest of All Times Comics Anthology, a collection of stories revolving around the concepts of supreme excellence, magnificent achievement, and inflated hype.

In short, each of the 20 stories in the collection is about the Greatest somethingof All Time.

“The idea of the theme was, on the one hand, to play with the idea of hype and success which are such big parts of our culture, or to look at the real meaning of greatness, depending on how each individual creator wanted to interpret it,” says co-editor Dan Mazur. “We just put this rich idea in front of a bunch of writers and artists and let them run with it. We ended up with a lot of unexpected things, and a really fun collection of comics. Maybe the greatest ever. No, definitely the greatest ever.”

The stories in The Greatest of All Time Comics Anthology range from tantalizingly economical two pagers, to a ten-page epic about the Greatest Neck Pillow of All Time; there are also two stories in full, vibrant color. Bound in durable card-stock covers, with numerologically-significant total page count of 123, the collection sells for the astonishingly reasonable price of $12.00. There is some mature content**, making the book appropriate for ages 14 and up. Or younger, if the parents are really cool.

Edited by Dan Mazur and Jesse Lonergan, contributors to the book are:


**PARENTAL ADVISORY: The word “orgasm” appears on pages 5 & 7, and “The Greatest Beer of All Time” contains references to beer.
Labels: Press Release, The Greatest of All Time
No comments: